Art historian cracks the code of an ancient temple Posted by TANNArchaeology, Breakingnews, Heritage, India, More Stuff, Recommended Reading 2:30 PM For 13 centuries, the Virupaksha Temple in Pattadakal has been one of the most recognizable landmarks in Indian art — a towering layer cake of elaborate, hand-carved friezes populated by a bevy of Hindu deities and symbols. Now Cathleen Cummings, Ph.D., an associate professor in the UAB Department of Art and Art History who specializes in Asian art history, has shown that these figures are more than just architectural decoration. “For a long time, there was an assumption that the sculptures on the outside of Hindu temples didn’t necessarily mean anything as a group,” she says. But “it seemed to me right away that there were certain, very conscious choices being made as to where deities and specific forms of deities were placed.” More than a decade of work and 11 trips to India led to her recent book, Decoding a Hindu Temple: Royalty and Religion in the Iconographic Program of the Virupaksha Temple, Pattadakal (South Asian Studies Association: 2014). Her discoveries identify images that glorify the king by referencing his family, conquests, and accomplishments, as well as other sculptural elements that offer religious guidance. Cummings describes one series of sequential inscriptions that depicts taking refuge in a deity, showing faith and then salvation. “It seemed like a clear sequence for devotees to follow,” she says. “It didn’t seem to be random images. There was a particular message that they could take away from it.” Similar types of religious and royal imagery adorn centuries-old churches across the world, Cummings notes. “The idea of iconographic programs has been accepted in the context of Christian art for quite a long time.” Cummings’s research on the temple also sheds new light on the important role that women played in ancient Indian politics and culture. Queen Lokamahadevi, the chief wife of the king, Vikramaditya II, led the construction of the temple to the Hindu god Shiva during the early Chalukya dynasty, around the year 733. The queen wanted a temple “dedicated to the king’s reign and victory in wars with three other dynasties,” Cummings explains. Though women were part of the king’s inner circle, Cummings found the queen’s prominent placement in the temple’s iconography intriguing. “Women have a very prominent role as temple patrons and probably also controlled resources much more than we tend to believe or know,” Cummings says. “The dynasty that built Virupaksha was among the earliest to participate in the tradition of building large temples in stone,” she says. “This particular temple is the best preserved and probably the most elaborate one that they built.” The builders didn’t leave many clues for Cummings to follow, however. “Apart from a few, very terse inscriptions on this and other Early Chalukya monuments, historians have not recovered much primary source documentation for this dynasty,” she says. Consequently, Cummings followed a scientific path, developing a hypothesis and following her instincts to find evidence to make her case. She pored over the placement of statues, studied Sanskrit inscriptions and ancient court documents from contemporary South Indian dynasties, investigated the temple’s rituals, and traveled to other Indian holy sites to build upon her findings. Teasing out the meanings behind the iconography was like an unfolding detective story, says Cummings, who is pleased that her work “fleshes out the Chalukya dynasty a lot more.” Cummings, whose interest in Indian and Asian art began during her own undergraduate years, is eager to continue her research and share her knowledge with UAB art history students, especially the detailed work that led to her findings. UAB’s $1-billion Campaign for UAB could potentially fund comprehensive research trips for her students, she says. “One of the things that nobody really teaches is how to do field work,” she notes. “I was able to reach my conclusions without having to physically chip away the temple.” Author: Williesha Morris | Source: University of Alabama at Birmingham [November 12, 2014]

Photos by Suriya Varman for malaysiantemples.com

This Sree Maha Mariamman Temple was previously part of  the Petaling Estate plantation before it gave way to development and today, it is the only one of its kind which has a shrine for Lord Brahma and Mount Mahameru installed on top of a turtle (an avatar of Vishnu) in front of the main alter. Even the Navagraha shrine is unique as the idol of Suriya Bagawan is installed together with His two consorts and horses. 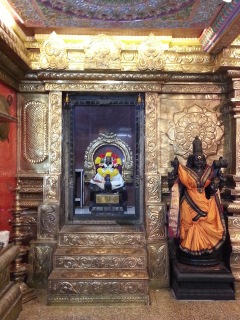 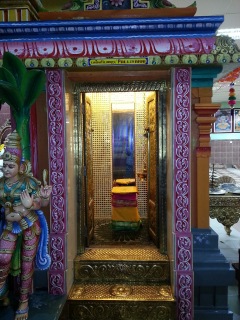 Gold plated stairs to the Garbhagraham

Suriya Bagawan with his two Consorts 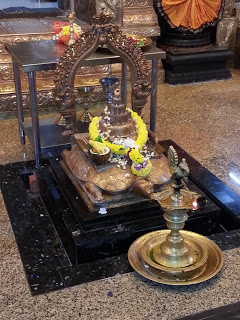 The Founder of the temple.

The Sri Mahamariamman Temple was founded by K. Thamboosamy Pillai in 1873.He was a prominent Malaysian of Tamil origin during the pre-independence years and was considered the leader of the Tamil community.Thamboosamy was also one of the founders and one of the original Trustees of Victoria Institution, Kuala Lumpur and the Batu Caves Murugan Temple. A Sivan Temple in Klang is also said to have been built on land which was owned by his family later donated to the temple committee.

He was said to have discovered Batu Caves, with its vel-shaped entrance, and was inspired to start a Hindu temple in devotion to Lord Muruga in 1888. The first Thaipoosam festival in Malaysia was also started by Thamboosamy Pillay in 1891.

So great was Thamboosamy’s philanthropic spirit, that he donated money to whoever needed it, regardless of race or religion. He contributed a sizeable amount of money to the building fund of St. Mary’s Cathedral, Kuala Lumpur in 1893, despite being a Hindu. 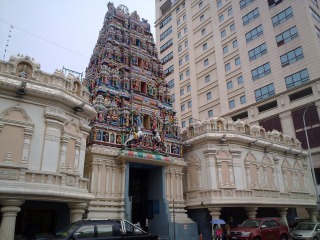 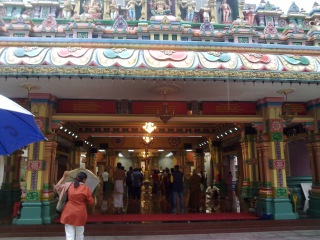 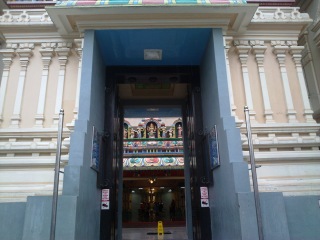 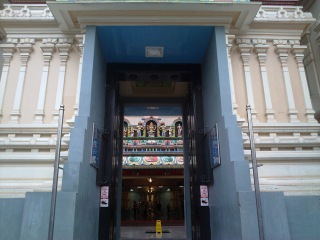 The outside towers and walls show an elaborate intertwining of Hindu deities that seem to reach for the sky, and the footpaths surrounding the temple are filled with vendors selling flower garlands and fruit to be given as offerings.

The temple was built in the 1860s by immigrants from Tamil Nadu who made their new home in this part of town, which still has a strong southern Indian influence. The temple is dedicated to Maha Mariamman (aka Maha Devi), the goddess of death, who is also believed to have the power to protect against disease and misfortune. The temple’s main shrine features an image of the goddess, Shakti, herself an embodiment of Maha Devi associated with creativity, fertility and femininity. The image is considered extremely sacred and white-robed Brahmans accept continual offerings from the faithful — many of them Thai Buddhists — in front of Shakti when the temple is open. A red splotch, or bindi, is placed by the Brahmans on the forehead of all who give offerings.

The temple holds special ceremonies in accordance with the moon, and each year in late October the Shakti image is paraded through the area’s streets to much fanfare during a festival bearing the goddess’ name. Note that the temple is considered to be very sacred — no photography is prohibited inside the walls and proper attire is required.

Intersection of Silom and Pan Roads
http://srimahamariammantemplebangkok.com
Opening Hours: Mon-Thurs 6:00-20:00, Fri 6:00-21:00, Sat-Sun 6:00-20:30
How to get there: On the corner of Silom and Pan Road, about a five-minute walk from either Surasak or Chong Nonsi BTS stations.

The Wonder that is Madurai Meenakshi Temple