Russia was known as Rishi Varsha an it surrounded the Bharata Varsha as described in the Puranas.

There have migrations from India, from the Sarasvati Valley Civilization,from the Dravida Kingdoms, and from the North again.

There is enough evidence in the present Russia right from the names of Rivers,Olga,Moksha from which Moscow is derived,Karaggana, Utkaraganga,

People living in the valley of the River Moksha spoke a language Moksha!

Place Arkaim, the name of Surya, Sun is Arka.

Arkaim is an important archeological site .

One finds the designs of swastika here and this site is dated 4500BC! 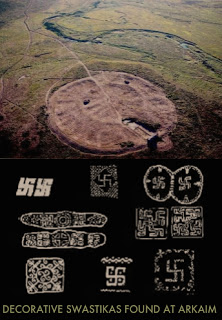 But reasonable reactions notwithstanding, why have people who are looking for their roots in the direction of Vedic ancestry been more suspect than any other indigenous people curious about their heritage? After all, it would appear to be an uncommonly large area upon which…